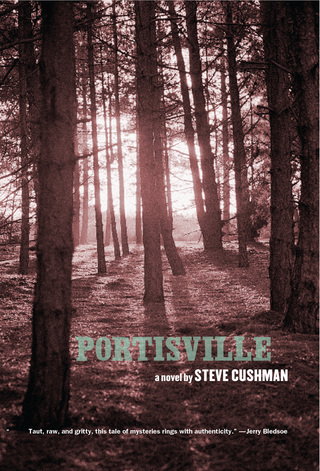 April 21, 11a-3pm, Lenoir-Rhyne University
I'll be reading from my new collection & leading a workshop on Narrative Poetry as part of Poetry Day in Hickory, NC.

Come home Boy, I Got Cancer, Kill Me. It was his father’s voice, a thing he hadn’t heard in twenty years.

So begins Steve Cushman’s Portisville, a powerful story of love and betrayal, mystery and murder. It begins when Jimmy Wills, a 34-year-old house painter living in the mountains of North Carolina, gets a telephone call from his dying father in the rural north Florida town of Portisville. Jimmy knows he won’t do what Truman Wills has demanded, but he finds himself drawn to the place of his birth by forces he isn’t quite able to name.

He discovers that the town is remarkably the same. One of his father’s best friends is still the sheriff and the other is the keeper of the general store. But in the course of his three-day visit, Jimmy begins to uncover dark and disturbing secrets from the past, including the truth about the murder of his mother. Although Truman was charged with the killing, he was later acquitted, and the crime has remained unsolved.

The murdered woman still haunts the dreams of her son, who was taken away at the age of 14 and raised by an aunt in North Carolina. Jimmy has tried since then not to think too much about his father, this hard and bitter man who had never so much as called him on the phone until his eerie demand to be killed. But when Jimmy pulls up to his father’s house, rundown now and set deep in the woods, the two men slowly begin to reconnect, with all of the promise and tragedy that entails.

In this tautly written debut novel, Steve Cushman paints a portrait of quiet desperation and flickering hope, of the tattered decency of a small-town family not quite able to free itself from the terrible weight of what really happened.

Add Steve Cushman to the roster of the Rough South school of literature. His novel follows in the tradition of writers like James Dickey, Harry Crews and Larry Brown.

Cushman's prose is very clear, very tight... in this raw tale about a father and son and their shared horror.
--Winston-Salem Journal

Portisville by Steve Cushman is a gripping story of betrayal, murder and hidden secrets. Haunted by the murder of his mother, and a mysterious phone call from the father who has not spoken to him in years, one man must revisit the hidden horrors of his childhood and painfully uncover a terrible truth before it destroys him, what is left of his family, and perhaps others caught in its wake as well. A serious, small-town novel brimming with gut-wrenching pathos that irresistibly compels the reader to turn the pages.
--Midwest Book Review
Loading…}